Failing so you can win

It has long been known in engineering circles that much can be learned from failure. Claude Albert Claremont, in his 1937 book on bridge building, "Spanning Space," wrote:

The history of engineering is really the history of breakages, and of learning from those breakages. I was taught at college "the engineer learns most on the scrapheap."

In one of my past lives, I was involved in performance car rallying. This involved racing in beefed-up cars over forest logging roads. In the ’70s, there was a driver named John Buffum. His day job was running a car dealership in Vermont, but he was also the top rally driver in the U.S. and had factory support from British Leyland, who supplied him with Triumph TR-7s, like this one: 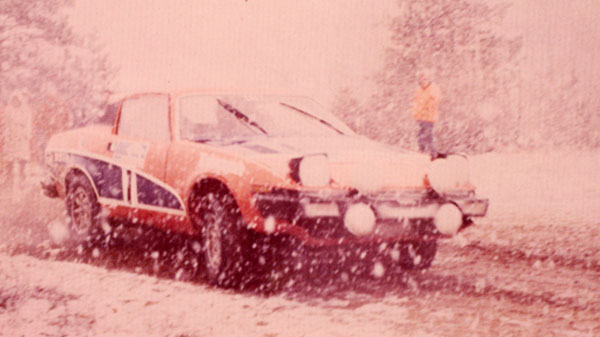 He was very fast, but he crashed a lot. Other drivers nicknamed him “Stuff 'em Buffum,” because he stuffed his car into the ditch so often. Each time, British Leyland would ship him a new TR-7 for the next race.

As time went on, he stopped crashing, but he was still very fast. Since he had crashed so many times, he knew exactly what the car felt like when it was right on the edge, so he knew when to back off. Other drivers who hadn’t had the luxury of getting a new car every race didn’t have this experience, so they had to be more cautious, and were thus slower. Buffum went on to win 11 National Pro Rally Championship titles and 117 Pro Rallies.

Tony Dismukes, a martial artist whose blog, BJJ Contemplations, I follow said this about practicing failure:

Engineers, racers, and martial artists all see the benefits of learning from failure, but too often in software development we consider failure a luxury we cannot afford.

Much of this is because we are always under the gun, trying to develop software to meet some too-early deadline. This causes us to stick to things that worked in the past, rather than trying something new, something that, if it works out, could make the team much more efficient or, even if it fails, might teach us valuable lessons.

You need slack to enable continuous improvement. You need to balance demand against throughput and limit the quantity of work-in-progress to enable slack.

Too often, we completely fill our release schedules with work, so that any failure that delays something by a sprint is a catastrophe. If we allowed ourselves enough slack to have experiments that failed from time to time, those failures would be made up for by the improved efficiency that comes from continuous improvement.